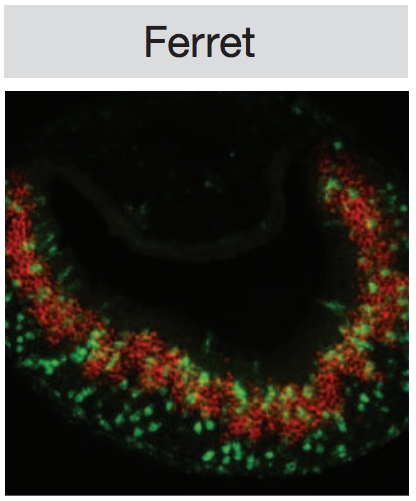 A study in Nature Methods has kicked up a bit of a fuss:

In 2007, his lab observed that mice spend less time licking a painful injection—a sign that they’re hurting—when a person is nearby, even if that “person” is a cardboard cutout of Paris Hilton. Other scientists began to wonder if their own data were biased by the same effect. “There were whisperings at meetings that this was confounding research results,” Mogil says.

Male, but not female, experimenters induce intense stress in rodents that can dampen pain responses, according to a paper published today in Nature Methods. Such reactions affect the rodents’ behaviour and potentially confound the results of animal studies, the study suggests.

Yup, the paper says that the stench of men is just plain stressful to rodents. And it’s just human males, but males from many (most?) species.

It is pretty well-established that many animals have neurons that have an innate response to the odor of other animal species. Look at the percent of neurons in the vomeronasal organ (VNO) of the mouse that detect the scent of specific other animals:

I suppose that means it shouldn’t be surprising that there would be a way to detect males across species. And the data from this paper kinda-sorta points to that: bedding from male guinea pigs, rats, cats, and dogs induced stress-related behaviors but not when the bedding came from castrated males (poor guys). Overall, the affect of the stress was stronger on the female than the male mice.

There are three interesting take-aways from this paper. First, obviously, is that males stress out mice they handle more than females do – and they stress out female mice more than male mice. Second, certain male-specific effects seem to require both an odor and the physical presence of the (male/female) handler. Third, the odor isn’t likely to be a pheromone but rather a complex mix of odors. Three of the stress-inducing odors that they identify are 300 μM (E)-3-methyl-2-hexenoic acid (3M2H), 0.75–3 mM androstenone and 0.75–3 mM androstadienone (4,16-androstadien-3-one), which I’m sure everyone is familiar with! The first is a fatty acid that contributes to “Caucasian male underarm odor” (yum), the second is a steroid found in sweat and urine (and celery), and the third is a metabolite of testosterone.

Also, let’s take a moment to pity the poor grad students who had to take “repeated rectal measurement of core [mouse] body temperature”.

For a long time, the canonical explanation has been that the hormone oxytocin is a sort of ‘love hormone’ whereby release causes some sort of bonding between two individuals. This story comes to us from the gerbil-like prairie voles. Prairie voles, you see, are pair-bonders who hook up with one mate for life. They’re so attached to each other that once bonded, males will attack any new female that they see (so much for “love” hormone). Luckily for us scientists, there is another closely related vole that does not pair bond. This made it relatively easy to trace the difference: oxytocin receptors in the nucleus accumbens (NAcc).

The NAcc is an area of the brain that is directly involved in motivation and reward; we tend to think of it as the place where the brain keeps track of how rewarding something is. By acting as a sort of central coordination center for value, it can directly promote physical behaviors. Activating the correct neurons related to reward on the left side of the animal will cause the animal to physically turn to the left.

The bond that prairie voles form is linked to oxytocin receptors in NAcc that change neural activity (and I’m simplifying a bit by neglecting the role of the related hormone vasopressin). This change makes their social (pair-bonded) life more rewarding.

At least, that’s one view. But many animals have a social life that does not involve pair bonding, and often they do not have oxytocin receptors in their NAcc. If oxytocin in NAcc was required for strong social behaviors, if they don’t have the receptors how do they have social behaviors at all?

In what I consider the most exciting paper so far this year, Dölen et al investigate what is the neural circuit that makes social interactions rewarding. Mice are actually social creatures, living in small groups to share parental and defensive responsibilities. Dölen et al exploit this by using a variation on a classic conditioned place preference (CPP) experiment. Mice are placed in one identifiable room with other mice (social); they are then placed in another identifiable room on their own (isolated). When they are finally put in a box with two rooms, one that looks like their social condition and one that looks like the isolated one, they spend much more time in the room that reminded them of their social experience. We tend to think this means they prefer that room because it was somehow more rewarding (or less aversive).

This social conditioning requires oxytocin. Yet, when they delete the oxytocin receptors from cells in NAcc animals still become conditioned. It is only when oxytocin receptors in other areas that project into NAcc do they animals lose any social reinforcement. These receptors are in one specific area, the dorsal raphe nucleus, which is a major source of serotonin in the brain. Interestingly, serotonin is also linked to social behaviors and modification of reward circuitry.

What this suggests is that oxytocin affects reward through serotonin; blockade of certain serotonin receptors in NAcc also abolishes social conditioning. It is not surprising that oxytocin could regulate reward in multiple ways. Serotonin may represent distinct aspects of reward – on different timescales, for instance – than other cells that feed into NAcc. By modulating serotonin instead of NAcc itself, oxytocin can precisely fashion the rewarding effects of social behavior.

As a technical matter, they also propose the receptor that serotonin is acting through (5HT1B). I am under the impression that this is an autoreceptor in NAcc. In other words, it is on the serotonin-emitting cell in order to monitor how much has been released to sculpt the output. By using pharmacology to block the receptor, I worry a bit that they are not getting the receptor which oxytocin is acting through per se but just modifying serotonin release in a gross manner. I feel a little vindicated in this worry by the fact that some of their technical results do not appear to be wholly blocked by 5HT1B blockage.

How do you determine whether two, three, or four individuals are interacting? With people, it can be fairly straightforward: they talk, touch, and communicate with each other. That’s not necessarily true with other animals which can release olfactory pheromones which we can’t see. Mice (like dogs) also communicate through scent-marking. Further, interactions might occur indirectly; if you are sitting in a chair, it makes it much less likely that someone else will come and sit in that chair as well… Which leaves us again with the broad question of how to determine whether (and how many) individuals are interacting if we can’t see their interactions?

Shemesh et al. turn to the technique that is the bread-and-butter for the Schneidman lab, the maximum entropy technique. This method relies on answering a very simple question about the correlations between individuals. That is, how well can you predict where an individual will be given the probabilities of each location? And how much better can you predict if you assume that there are interactions between two, three, or four individuals?

In order to see whether these interactions existed between mice, they filmed mice for 12 hours overnight for four days and observed their locations. They then made the simplest assumption: what if the animals weren’t interacting at all? Then you can assume statistical independence. In other words, knowing the probability of each mouse’s location individually will tell you what the probability is for all four together. This, it turns out, doesn’t do so well. What about if the probability for a mouse to be somewhere was related to where the mouse observed just one other individual at a time was? There are many different models of statistics and behavior that can fit this data, but Shemesh et al. used the maximum entropy model. This uses the absolute minimal level of assumptions – just the probabilities and the order of correlations and is as uncertain [entropic] as possible about everything else. These sets of models have a long history in statistical physics. They find that using these models, interactions between multiple individuals is very important. 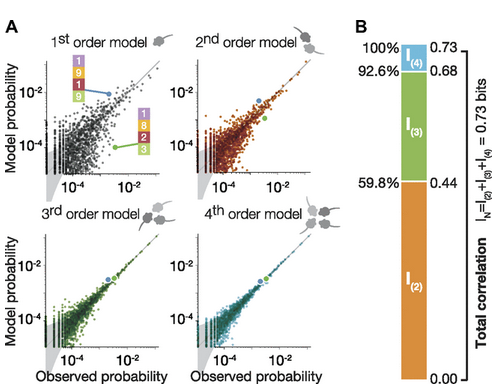 This also allows us to examine which are the strongest interactions. Here are three examples, the first being an important interaction between a pair of individuals, the second between a triplet, and the third being a negative interaction: 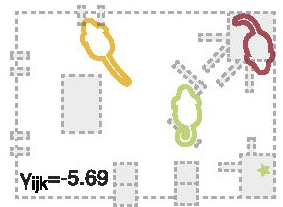 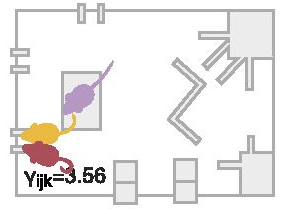 This is a nice, principled method for extracting the interactions between individuals. It’s a system that can get data quickly. I hope one of the next things that they do with it is start examining mutants (dopamine receptors, etc). I also wonder how the interactions scale with individuals. Did fourth-order interactions explain so little information because there were only four individuals in the arena? Or is there something more fundamental that is occurring?