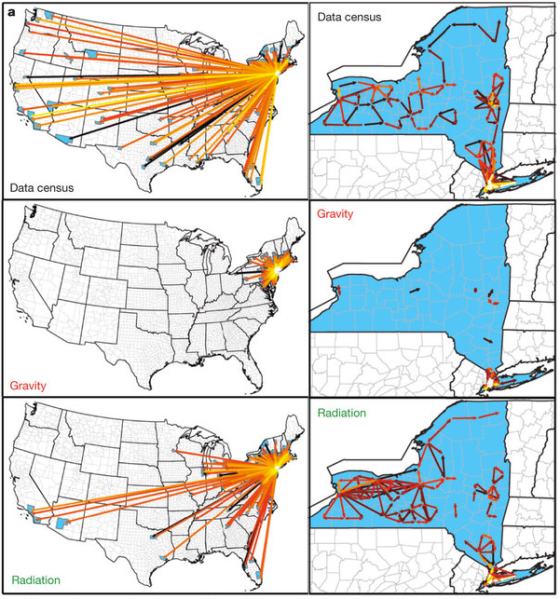 People move around.  A lot.  In our daily lives and over the longer term, we are constantly moving from place to place.  Is there a simple way to understand our mobile interaction with the world?  Albert-László Barabási has spent a substantial amount of time trying to understand this question.

A couple of years ago his lab took anonymized data from cell phone carriers which let him track movement from cell tower to cell tower.  Over a course of three months, they analyzed how predictable a person’s movement was.  They did this by measuring the entropy, or orderliness, of movement; a low entropy is very predictable while a high entropy is essentially random.  Movement entropy was large when looking at the overall number of locations a person visits at any random time, but the entropy of movement within those locations (temporally uncorrelated) was much smaller.  Even smaller was the entropy of the pattern of movements within those locations.  In fact, 93% of a person’s movements can be predicted!  And there was no significant difference between weekdays and weekends, so this isn’t just due to the fact that people spend a lot of time going to and from work.  There was also not a difference between genders, people of different age, or rural and urban environments.  But the entropy distribution did have fat tails, so even though people are generally pretty predictable, they are prone to veering off into drastically new locations.

How about migration between different regions?  Barabási’s lab looked at movement between counties.  The previous model for this migration was called a gravity model, in analogy with Newton’s law of gravity.  It tried to explain migration as a simple case of attraction based on the multiplied population of two areas, divided by some function of the distance.  However, this doesn’t do a great job of actually predicting how people move.  His lab took data from the census and developed a new model that they are calling a radiation model.  Using some slick math, they suggest that the flux of movement between two places is governed by the law:

So the number of people moving between two areas is not just a function of how many people live in each area, but also how many people live in between!  And the model makes some pretty impressive predictions and uses some pretty slick math to get a simple equation.  The moral of the story here is that how people move about their spatial environment in their daily lives, how they commute between places, and how they up and move to new places is all regular and fairly predictable.