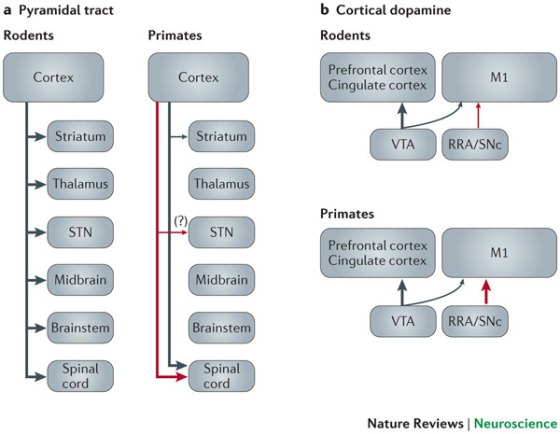 There was a recent comment in Nature Reviews Neuroscience on differences in dopaminergic systems between animals. It has a few great paragraphs that look like this:

Species differences should also be considered when discussing dopaminergic projections to the cerebral cortex (Fig. 1b). In rodents, mesocortical dopamine projections arise almost exclusively from the ventral tegmental area (VTA) and terminate mostly in prefrontal regions. The primary motor cortex, where a large population of PT neurons is located, is only sparsely innervated by these fibres. By contrast, primates (including humans) have gained a substantial dopaminergic innervation of M1 and related motor cortices7, 8; this innervation has arisen in large part from the substantia nigra pars compacta (SNc) and the retrorubral area (RRA)9, 10, thereby suggesting a prominent role of cortical dopamine on PT neurons in the M1 of primates, but not in rodents.

So if that’s your thing, you should go read it.